Ambassador of Canada to Mongolia 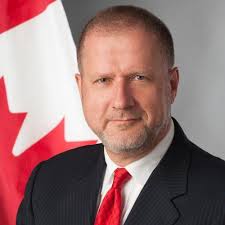 Ambassador Eelco (Ed) Jager worked as a lawyer (LL.B., University of Western Ontario, 1993) and sales representative in the private sector before joining the Department of Foreign Affairs and International Trade as a trade policy officer in the Investment Trade Policy Division in 1999.

He presented his credentials as Canada’s Ambassador to Mongolia to President Elbegdorj on March 11, 2015.  Ambassador Jager and his wife Cathy have five children and seven grandchildren.