Ambassador of Mongolia to Canada 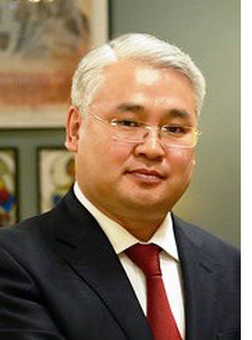 Ambassador Radnaabazar Altangerel presented his credentials to His Excellency the Right Honourable David Johnston, Governor General of Canada, on May 5, 2014, becoming fourth resident Ambassador of Mongolia  to Canada.

Ambassador R. Altangerel was appointed as Director  of the State Diplomatic Protocol Department in February 2010. Previously, he served as Ambassador of Mongolia to France, Spain, Portugal and Monaco and Permanent Delegate of Mongolia to UNESCO between 2006-2010. He worked in various capacities with the Ministry of Foreign Affairs of Mongolia starting as an attaché in 1990-1992, rising to become the State Secretary of Foreign Affairs of Mongolia in 2003-2006 and the Chief of Diplomatic Protocol in 2000-2003. He has served as a third and then the second secretary at the Embassy of Mongolia in Paris i 1996-2000.

Ambassador R. Altangerel graduated from the Moscow State Institute of International Relations (MGIMO) in 1990, graduated Institute of International Studies (IUHEI) 1993-1994 in Geneva, Switzerland, and Ecole Nationale d’Administration (ENA) in 2001 in Paris, France
and speaks in French, English and Russian.
​
Ambassador R. Altangerel was born in Tsetserleg, Arkhangai province, Mongolia, in 1966. He is married to Mrs. Tseveendorj Tsetseglen. They have a daugther, a son and a grandson.